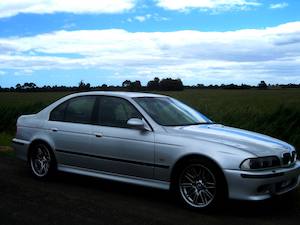 We settle the score

Like most cars on the market, there are some models people love or hate and there’s no in between. When it comes to public opinion of the E39 BMW M5, things are no different. But we’re here to settle the score once and for all.

Is this BMW underrated or overrated?

History of the BMW M5 series

Before we dive into the good, the bad and the ugly of the E39 M5, let’s start with a short history lesson on the BMW M5 series. First launched in 1985, the M5 series was designed and developed as BMW’s performance vehicles.

The first-generation M5 vehicle was the E28 and at the time of its launch was the fastest production sedan on the market. The M5 model was built on the e28 5 Series chassis but with the engine from BMW’s M1 supercar.

What makes the E39 so special?

The E39 BMW M5 was introduced to the world in 1998 at the Geneva Motor Show. Why is it so special? It was the first M5 to come with a V8 engine.

Even to this day, the sleek design, stunning bodywork and luxury features are yet to show their age.

In a recent article written by whichcar.com.au, the E39 M5 model was described as “the capable four-door on the planet, regardless of badge or price.”

If you’re a fan of the BMW, you’ll no doubt know the short BMW Film “Star” which was directed by Guy Richie and featured Madonna being driven around in the E39 M5 by Clive Owen. If you haven’t seen the short film, do yourself a favour and watch it below.

If this doesn’t make this car special, we don’t know what will.

Most cars come with their quirks and gremlins, and while the E39 M5 is one of the most reliable vehicles on the road, it still has some issues to look out for.

Its idle control valve (ICV) has been known to have idling issues including stalling in cold weather. The fix for this is usually as simple as giving it a clean.

The E39 M5 can also experience issues with the rear subframe bushings wearing within the first 100,000kms, causing the ride of the car to diminish quickly. Again, these can be replaced relatively quickly and easily.

VANOS, which use oil pressure to change the intake and exhaust cam timings, have also been known to have issues in this model. These can be a costly exercise to replace the unit but ways around this can be found by searching for other fixes on the internet.

While the E39 M5 has been noted for its exceptional drivetrain, the model was never offered in an automatic transmission. But do we really see this as a problem?

As avid fans of European cars and in particular BMWs, we believe the E39 M5 is often underrated and not seen for its remarkable engineering that was ahead of its time.

Given the demand for them in the marketplace and for spare parts to maintain and restore these vehicles, we’re confident we’re not the only ones who share our opinion.

Let us know what you think!

Run Auto Parts stocks an extensive range of parts for the E39 M5 and all BMW models. Don’t forget to use our parts finder to search for all parts to fit your make and model.